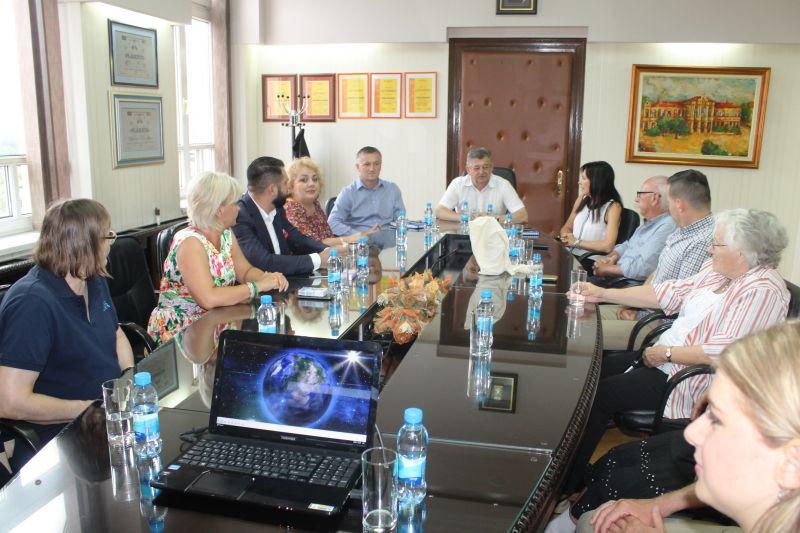 The mayor of Bijeljina, Mico Micić, organised a reception for the delegation of the partner city of Langenhagen and the city of Braşov from Romania, who were visiting Bijeljina on the occasion of the Saint Panteleimon days. Deputy Mayor of Langenhagen, Willi Minne, pointed out that he had been in Bijeljina for the fifteenth time and that these two cities have signed their twinning agreement already ten years ago and that they have a long-standing cooperation.

- I am proud of our long friendship, and it is my pleasure to be the guest of Bijeljina. It is a great honor for me to say that all citizens of Bijeljina are my friends because I have met very kind people here, Minne said. The head of the delegation of Braşov, Deputy mayor Kostel Mihai, thanked for the invitation and extended greetings to the citizens of Bijeljina from all people of Braşov.

- We hope that we will achieve the partnership with Bijeljina as we did with a large number of cities in Europe. It is essential for us to have good relations with the towns from neighboring countries and we hope that we will start cooperation with Bijeljina after this visit, said Mihai. Mayor Mićo Mićić emphasized that he is extremely proud and satisfied that over 25 delegations from various cities from the Republic of Srpska, the region and the rest of Europe visited Bijeljina this year. Langenhagen is the best example of a long-standing friendship of citizens of the two cities, by which many cultural, humanitarian and social projects have been implemented, and recently, thanks to our partnership, we have the opportunity to implement a project with the German Federal Ministry for Economic Cooperation and Development. We expect that long-term cooperation will also be established with the representatives of the city of Braşov, for the mutual benefit of the two cities - said Mićić.